Question of the Day (AAPI Heritage Month): What company, founded by an Asian American, creates computer chips that power games like Fortnite and Minecraft?

Answer: Nvidia was founded by Asian American Jensen Huang in 1993 and he remains CEO and President today (#186 on the Forbes 500 list too) 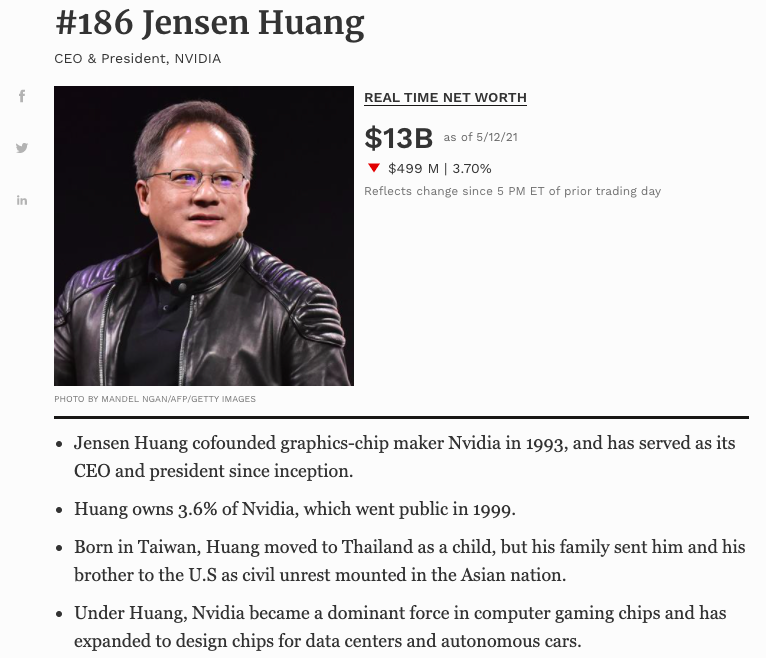 Behind the numbers (CNBC):

Huang, who co-founded Nvidia in 1993, arrived in the United States in the early 1970s with his brother. Their parents sent them to live with relatives while they got their education.

In previous interviews, Huang said that growing up playing video games taught him perseverance. Losing over and over again made him push himself to win, he said in 2010.

Waiting tables at Denny’s in his 20s brought the future Nvidia CEO out of his shell by teaching him how “make the best of a state of chaos,” he once told the New York Times.

Huang went on to earn a master’s degree in engineering from Stanford University. By 29, Huang and two friends — engineers Chris Malachowsky and Curtis Priem — co-founded Nvidia with just $40,000.

Be sure to check out today's (May 13th) Virtual PD on Personal Finance on Social Media: Highlighting Asian American Pacific Islander Creators

Looking for more Questions of the Day? We have over 400 available and they are sorted by topic in the Question of the Day Library.