Question of the Day (Updated): What percentage of Americans can not cover a $400 emergency with cash/savings account emergency fund*?

Are you looking for Free PD in this content area, one hour at a time, on your own time? Check out our multiple On Demands over various savings topics.

If you want to become content expert and earn an NGPF certification, consider our Banking & Budgeting Certification courses.

*Ways of payment include cash, funds from savings account, or credit card transaction paid off next statement. 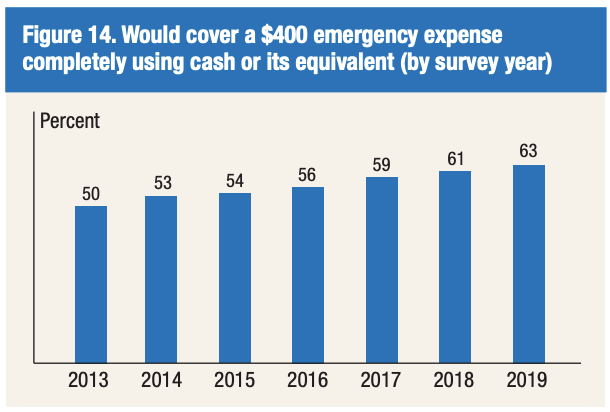 ⟶ Our DATA CRUNCH: How Would Americans Cover a $400 Emergency? from our Savings unit fits perfectly with this post.

Behind the numbers (Federal Reserve Board):

"Relatively small, unexpected expenses, such as a car repair or a modest medical bill, can be a hardship for many families. When faced with a hypothetical expense of $400, 63 percent of adults in 2019 said they would cover it exclusively using cash, savings, or a credit card paid off at the next statement (referred to, altogether, as “cash or it's equivalent”)—a 2 percentage point increase from 2018. In 2013, half of adults would have covered such an expense in this way."

It is important to note that of the 37% who said they did not have an emergency fund prepared to pay for a $400 unexpected expense, only 12% stated they were completely unable to pay for the expense. That being said, those adults who cover the $400 expense from credit cards paid off over time or using a payday loan, line of credit or overdraft will incur additional interest/fees as well, making their financial situation even more difficult.

"...for adults overall in April, the share who reported they would pay an unexpected $400 emergency expense entirely using cash, savings, or a credit card paid off at the next statement was essentially unchanged from the fall of 2019. Yet those who experienced the loss of a job or work hours were less likely to report they would pay an unexpected $400 expense in these ways."

Your students can play NGPF Arcade Game Spent to experience what it means to live "paycheck to paycheck" and one unexpected expense away from financial difficulties.

To receive a Question of the Day in your email inbox, subscribe to the NGPF Blog.

Click here to sign up, it only takes a moment and you will receive one email each morning that will include the Question of the Day or a FinCap Friday, and other timely and engaging resources.