Back to Category
Oct 26, 2016
Featured Teachers 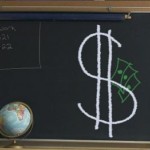 It was payday in Lisa Holland’s classroom at Mount Pilchuck Elementary School.   Two young bankers handed out colorful slips of currency bearing the image of a stately frog.  Students were paid in the Froggy dollars according to their Pond 20 workplace expectations, such as coming to school on time.  In a few months, they’ll use those earnings to become entrepreneurs. They’ll write business plans. Jockey for prime real estate. Hire employees. Follow health codes. Advertise their wares. Pay taxes.

It was Brennan’s idea to introduce the economics and financial literacy programs, growing the programs into two of the most popular electives at MSMA, an independent Catholic high school.  “Shortly after the financial crisis, the recognition that we, as a nation, were graduating students that really didn’t know how to manage their money,” she said. “It really came back with a vengeance when the financial crisis hit because people obviously had gotten into debt way above their ability to pay that debt. I felt that with the women it was particularly important  because women often were in a relationship and kept in the dark as to how to manage their finances and recognizes that for many women, at some point in their life, they will be on their own, and they really do need to know how to navigate their financial lives. As a female teaching females, I felt really strongly that that need needed to be met.

Owen Middle Schoolers “rocked out” to a financial literacy rock concert.  The four-person rock band Gooding is based out of Los Angeles. They travel the country, making 60 stops and sharing inspirational lessons of finance and discipline.  Teachers said financial literacy can be a lifetime struggle for some people. That’s why it’s important to start early.  “If we can start building the foundation now for how to manage money, how to think about money, how to think about what you’re bringing in and what’s going out and tie that into an entertaining lesson, we are more than happy to do that,” Dr. Heidi Von Dohlen, the school’s principal, said.

This Tuesday, October 18, members of the 2018 class of the San Marcos Entrepreneurship Academy will set out to educate over 400 fellow Royals on an assortment of topics ranging from “What to Know About Student Loans”, “Women in Finance”, “First Impression”, “Fraud Alert”, “Investment Principles”, “Entrepreneurship Skills”, and “The Benefits and Dangers of Credit Cards”. Each of the presentations cover a variety of topics that contain necessary information that students should know before moving on to a college or university.

After graduating with an education degree and spending 7 years in an elementary classroom, Laura made the switch to the non-profit world and loves interacting with students, educators and business professionals across the country. She is passionate about all students having access to high quality education and views personal finance education as one way to ‘level the playing field’. When Laura is not locating or creating high quality educational resources, you can find her mountain biking or searching for the best ramen in town!

Budgeting Activity: The Bean Game and some extension ideas