3 Interactives: What Happens if Minimum Wage is Raised?

You may have seen headlines this week such as these:

These headlines are particularly relevant to teens, as they are likely earning around the minimum wage. Here are a few interactives and ideas to capitalize on their interest.

This tool would allow for students to see the consequences (positive and negative) if the minimum wage was raised to $15 an hour by 2025. As a teacher, you could quickly build out a debate or data crunch using this tool. Dr. Scott Wolla has an excellent debate lesson for this for Economics teachers: Using a Structured Minimum Wage Debate in the Economics Classroom. Thanks to Michigan Council on Economic Education Director Derek D’Angelo for this series of articles that allow students to further understand the issue.

Notice that over time, teen unemployment is particularly elastic relative to older age groups. When recessions strike, unemployment rates for 16-19 year olds increase greatly. Would spiking minimum wage have the same effect? This could make for an interesting classroom discussion.

Interactive: Teen disengagement is on the rise via Brookings

The interactive is at the bottom: Teen Labor Force Participation and School Enrollment, 2000-20 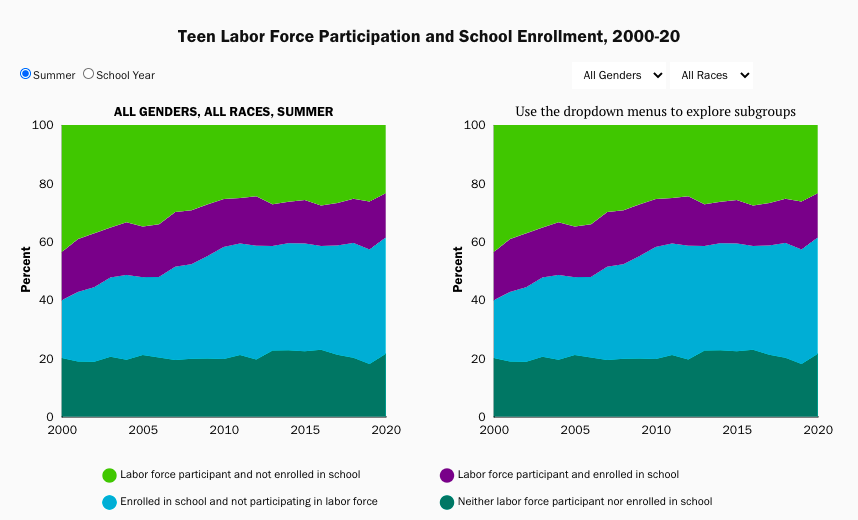 The unemployment rate measures the share of workers in the labor force who do not currently have a job but are actively looking for work. Meanwhile, the labor force participation rate measures the percentage of the civilian non-institutional population at certain ages that is working or actively looking for work. As you can see, a clear pattern has been established since 2000.

Making a difference in the lives of students through financial capability is Brian’s greatest passion. He comes to NGPF after fifteen years of public school teaching where he was the ‘11 Ohio Department of Education recipient of a Milken National Educator Award, the CEE Forbes Award winner, and a Money Magazine/CNN "Money Hero". He served on the working group for President Obama's Advisory Council on Financial Capability. He has private school experience as a Trustee for the Cincinnati Country Day School and was a past Ohio Jump$tart President. Brian holds a BBA and M.Ed. When Brian isn’t working alongside his NGPF teammates he is likely spending time with his wife, three children, and dog; hiking, or watching Ohio State football.