Digging Deeper: Money and Gender Part I – the Pay Gap

Two events in April brought the issue of gender pay gap into the headlines this past month.  The first was the April 4 deadline for all companies in the United Kingdom to report on pay by gender in their companies.  (Apparently, it is against the law to pay different rates/salaries by gender, but the government agency responsible for enforcing this is woefully short of staff and funding.)  For those reporting by the deadline, 80% in fact pay men more. This has brought the issue front and center in the UK and in the US.  Individual companies are being called out on their appallingly unequal pay.  Perhaps shaming them will do what the government can’t.

This date symbolizes how far into the year women must work to earn what men earned in the previous year.

What do we know about the situation in the US?  Since the passage of the Equal Pay Act 55 years ago, the pay gap in the US has narrowed from women making 59 cents for every dollar a man earns, to 80 cents.  (Yes, paying different amounts by gender in this country is illegal too.) This is still a sizable gap. Should we make our companies report on salaries as well? It is also interesting the earnings of men increase with age, but in the US today, older women earn less than younger women beginning at age 45. 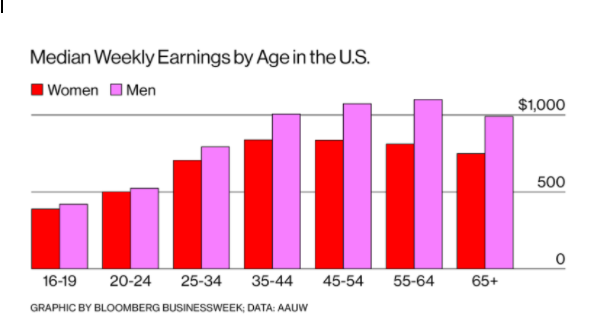 I have always wondered if these averages are biased by the fact that women have traditionally taken lower paying jobs (perhaps for flexibility/caregiving—but that will be dealt with in part 2).  This is referred to as “occupational segregation.” (Note: this link has a great video on Lily Ledbetter.)

"Occupational segregation" is the term academics use to refer to this split, with women historically relegated to lower-paying, "support" jobs (think secretary or office manager) and men taking the higher-paying, "glamour" jobs (think boss, manager, etc.). 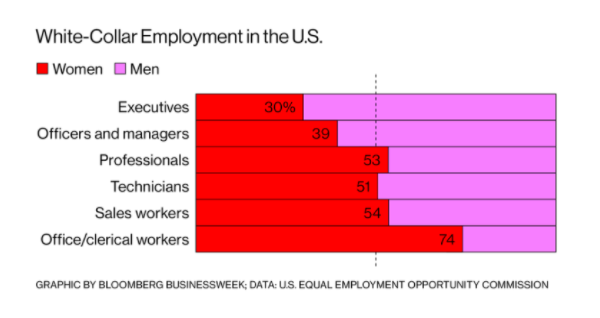 I can’t help but wonder if these jobs are lower paying BECAUSE women have historically held them.  But even within these female dominated fields, men are paid more. (I’m not sure how that can be true among public school teachers, because everywhere I taught my salary was totally determined by years of experience and degree.) Apparently, if you dig into the data and you control for all these differences across all fields, there is still a difference, and it seems to increase (not decrease) with the level of education, according to leanin.com.  (One academic study claims that at the CEO level, wages are in fact comparable.)  And when women enter male dominated fields, the average pay drops.  Bottom line: the 20% figure most commonly quoted IS for like jobs.

The People’s Policy Project ran the numbers a different way, by NOT controlling  for anything. The result was a 39% gap between the median income of men and women.  This DOES reflect both the hours worked (women may work fewer hours to take care of household responsibilities and childcare), and lower salaries in careers historically dominated by women.  So which is the truer representation? 20% or 39%?

Compounding the problem for women is the “child penalty.” Yes, perhaps this will change as paternity leave becomes more prevalent in the US.  Taking time off, especially during the 10-year window (25-35) when most women tend to have children, often leaves women permanently behind, unable to catch up to their male peers.

Working mothers who have their first child before the age of 25 or after they are 35 will gradually close the salary divide with their husbands. But having a child between those two ages will significantly affect how much women earn, the study says. 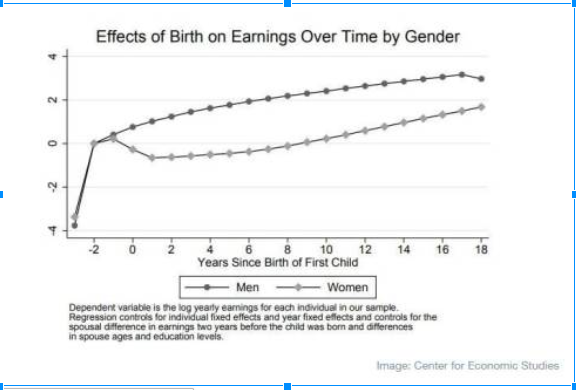 Interestingly enough, men with children have historically been paid MORE than men without.  Hmmm, what does that say about our society?. 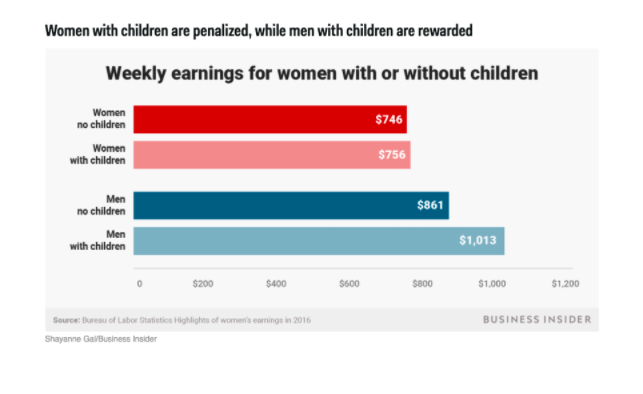 In case you haven’t read enough statistics or seen enough graphs at this point, this Business Insider article has several more interesting graphs breaking down the data on the gender wage gap, including a state-by-state view.

To sum it all up, this CNBC video does an excellent job of combatting the six myths surrounding the gender pay gap.

Let’s take a quick look at what some companies and policy makers are doing to try to help here.  In terms of policy, salary history will be the next forbidden question to ask during interviews, thanks to a ruling by the Ninth Circuit in what is known as the “Rizo” case.  Why is this important? Because it will allow women to jump to a fair salary without being dragged down by their (lower) salary history.

On a company level, here are a couple of anecdotes.  Thanks to Reese Witherspoon, HBO moved quickly to equalize pay across the board.  Starbucks took a hard look at it’s numbers and found that the gender pay gap was 22% overall and 34% among its most highly educated employees.  It moved to remove that gap immediately in the US and is aiming to remove it across its worldwide operations.

When looking back at the graph of median weekly earnings by age, the gap appears smaller for younger people.  Let’s hope that by making both young women AND men aware of this very real issue, they will work towards eliminating it.